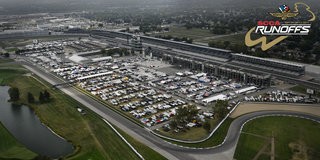 TOPEKA, Kan. (Oct. 5, 2017) -- The 2017 SCCA® National Championship has obliterated the previous Runoffs® participation record.  This year’s event at Indianapolis Motor Speedway officially had 969 entries take to the track.  That is 260 more than the previous record of 709 set in 2004 at Mid-Ohio Sports Car Course.

“The 54th running of the SCCA National Championship held at Indianapolis Motor Speedway was not only the biggest Runoffs in Club history, but based on feedback from drivers, workers, stewards, staff and partners, it may very well have been the best Runoffs to date,” said Mike Cobb, SCCA President & CEO. “This year’s event was more than a National Championship – it was a motorsports experience.  There were nearly 1,000 talented drivers, and more than 550 workers, volunteers and staff who supported over 50,000 miles of racing.”

The 2017 Runoffs, held Sept. 25-Oct.1, crowned champions in 28 different car classes.  Several thousands of people were in attendance and watched fantastic racing from spectator mounds and stands around the hallowed Speedway. Eric Prill, SCCA’s Vice President & COO, noted that at one point nearly 1,050 drivers had registered to participate.  As expected, that number dropped a bit -- but not much.

“An event of this size wouldn’t have been possible without a lot of cooperation from all our participants,” Prill said. “Early in the year, we started communicating the unique challenges that the biggest-ever Runoffs would present, from the event schedule to fitting the teams into the paddock. There were sacrifices made along the way, and in the end, our members worked as if they were one big team to not only make the paddock plan work, but to make the on-track elements work as well.”

Deanna Flanagan, SCCA’s Director of Road Racing, added that “the biggest event may not always translate into the best event. But in 2017, at the Indianapolis Motor Speedway, SCCA had record-breaking numbers as well as an outstanding event. This is a proud moment for all of SCCA and special thanks goes out to our specialty chiefs, workers, drivers and the IMS staff for making it happen.”

Along with setting an all-time record for competitors, the 2017 Runoffs also reset the record for entrants in the first 24 hours that registration was open.  This year, 763 driver entries were registered on the first day -- demolishing the 413 entries made in 24 hours for the 2016 Runoffs at Mid-Ohio Sports Car Course.

This year’s winner-take-all National Championship Runoffs consisted of 19-lap or 40-min. races on a 15-turn, 2.592-mile road course at Indianapolis Motor Speedway. The course layout consisted of ten right-hand and five left-hand turns, as well as a main straight 3,700 feet in length.  The configuration included portions of the track previously utilized by Formula One for the U.S. Grand Prix and currently used by the Verizon IndyCar Series for the Grand Prix of Indianapolis.

With the 2017 Runoffs at Indianapolis Motor Speedway in the record books, the Club now looks ahead to the 2018 National Championship to be held October 16-21 at Sonoma Raceway in Sonoma, California.  This will be the first time the Runoffs have visited that track just north of San Francisco.

The Sports Car Club of America®, Inc., founded in 1944, is a 67,500-member motorsports organization that incorporates all facets of autocross, rally and road racing at both Club and professional levels. With headquarters in Topeka, Kansas, the SCCA annually sanctions over 2,000 events through its 116 Regions and subsidiary divisions. Much of the SCCA’s activities are made possible with support from the following Official Partners: Chevrolet, the Official Truck of the SCCA; Hawk Performance, the Official Brake Products of SCCA; Mobil 1, the Official Oil of SCCA; Sunoco, the Official Fuel of SCCA; and Tire Rack, the Official Tire Retailer of SCCA. To learn more, please visit www.scca.com.